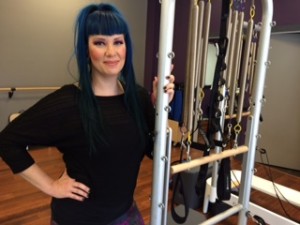 We asked our new instructor Courtney Stone a few questions to get to know her better. I expect to talk about Pilates during these interviews. And sure, we talked movement and Pilates, but I didn’t expect to hear about ribbon dancing, roller derby youth leagues and zombies. I had no idea that she had so many skills and great stories. Join us in welcoming Courtney to our studio!

What was your favorite activity in gym class? Between 1st and 4th grade my gym class separated us girls from the boys. We didn’t do typical “gym class” stuff. We did things like square dancing, gymnastics, balance beam, vault, ribbon dancing, choreographed dancing with bouncing balls (I don’t know what that was about), parachutes, etc. Needless to say, ribbon dancing was just about the most amazing way to spend my time to my adolescent self. Throughout middle school and junior high, I really enjoyed volleyball and soccer. My high school had an outdoor pool and since I was in New Orleans, well, that was the best place to be if you had to be outside for gym class.

What is your biggest success up until now? I was the co-founder and COO of a 501(c)3 nonprofit all-female banked track roller derby league, which included a junior derby league. It was really the opportunity to introduce the addition of the junior league that ultimately brought a whole new level of importance to the success of the league. The junior league gave young girls, who either didn’t have interest in traditional sports or felt like they didn’t fit into the existing defined role of traditional sports, an opportunity to redefine what their options were to play sports and own their identity within that role. Having surpassed all the goal markers, projected growth and development of the business after 6 years, I could feel proud to hand it over when my calling was to move onto a profession that my roller derby injuries actually brought me to, Pilates.

What is the one thing that should be taught in school that isn’t already? Real nutrition, not the simplified and heavily lacking version of what’s taught in schools currently. If we were more educated consistently and progressively about food and how it relates to our health needs or lack thereof, we would likely have very different habits than we currently do as a society. We consistently and progressively learn mandatory subjects such as math, science, history, literature, etc but not about what we put into our bodies throughout the day every day. That blows my mind. Imagine the impact of having to learn about food and nutrition every day of every year for 12+ years just as we do of many other subjects. The grocery stores might be smaller and look more like farmer’s markets. Dare to dream…..

Play dodgeball or kickball? When I was 8, I fell victim to effects of a ball rolling under the foot as one might overeagerly try to kick it and simultaneously begin to run, resulting in a face first dive to the floor and ending with a split open chin. For that reason, dodgeball wins.

What do you enjoy about Pilates? There’s so many things. Simply put, it’s holistic and it’s effective for anyone and everyone regardless of where you’re currently at and where you want to be. The thought provoking aspect of Pilates and how it holds you responsible for the control of every single movement of your body makes it an irresistible method of movement to me. 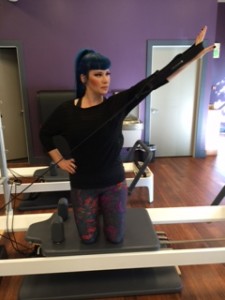 How did you get started teaching? I already held a NASM Personal Training Certification but knew that something was missing from my passion to be a personal trainer. As soon as I went to my first Pilates Reformer class, I found what that missing element was……the deeper idea of strengthening from the inside out and the thoughtfulness and awareness that Pilates demands from every movement, no matter how subtle or expansive. I continued to attend classes as a student, all the while, waiting for the next Instructor Training to begin. When the time came to enroll in the STOTT Instructor Training program at Bodycenter Studios, I quit the job I had at the time and dove head first into my new future career and haven’t looked back.

What is your favorite exercise and why? I don’t have just one. If it inverts me or stretches me, it’s my favorite right at that time. I also particularly love exercises that require a great deal of balance. Exercises like tree and short spine hold a special place in my heart.

How has your own Pilates practice improved your health? I came to Pilates with a laundry list of fairly fresh sports related injuries. While I received physical therapy for every one of them, I wasn’t what I would call fully recovered after completing physical therapy. Pilates has restored me to a higher level of function prior to any of my injuries, not only overall, but at each previous injury site. My  I’ve also gained an invaluable level of awareness so that I may increase my chances of injury prevention going forward.

How did you discover Pilates? I was at the gym doing the only thing I could do there with crutches, a removable boot, and a freshly partial weight bearing healing broken ankle…riding the recumbent bike. Feeling particularly ambitious, I decided to review the group class schedule. There it was, Mat Pilates. I didn’t know much about Pilates at that time but I knew that most of it consisted of lying down and that as one thing I could do proficiently with a broken ankle. I decided to give it a shot. To my surprise, very little of the class was new to me since most of my physical therapy regime consisted of what I realized were also Pilates exercises. After a few months of mat Pilates 3 times/week, I joined a Pilates studio and experienced the reformer for the first time. The rest, as they say, is history.

How would you survive a zombie apocalypse? I’ve already begun the steps to learn self sufficiency without modern luxuries or technology. For example, I increase my home garden every year to learn how to grow more and more of my own food. I’m skilled in various forms of weaponry but still plan to learn the crossbow this winter. I could probably use more practice with a sword and small cutlery at close range. Most importantly, I study the Walking Dead and make mental note of what does and doesn’t work.

What do you usually do when you have leisure time on your hands? It really depends on how much time I have and what time of the year it is. During the summer, most of my leisure time is spent gardening or some sort of activity bringing me near or in the water. During the cold and rainy months I like to pretend I’m a furniture and/or home accessory maker by building or making things I really don’t know how to build or make… like nightstands, lamps, lampshades, headboards, chandeliers, reupholstering, refinishing, etc. One thing stays the same all year round and that is my addiction to, as my husband says, “watching stories”. Name a show, any show, I’ve probably seen it.

Book a session or class with Courtney today!

← Confessions of a Reformed Runner
Movement, Mindfulness and Vino! →